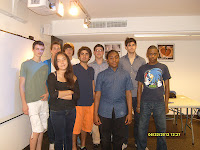 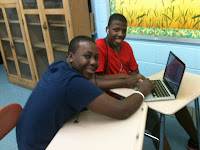 An EVC Film Production Art Course at UA Gateway this summer earned about 50 rising sophomores an art credit, and has spawned a digital producer movement at the school, soon to be its own club!  Pictured:  Michael Ruddock and Michael Delaigle hard at work on their narrative short film.

Smack Mellon Summer Arts Intensive featuring Danissa Santos is a competitive program for new artists to hone their artistic gifts among their peers citywide in a studio setting, culminating into an exhibition in Brooklyn.

The vibeSummer drama program gave talented young women the opportunity to pool their free writes into a script that was developed into a live dramatic production full of creative writing, dance and hilarity.  UAG sophomores Tiyana McCoy and Nubia Damali on the far left! 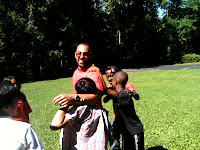 Freshmen Gate-Away 2012 in Rhinebeck, NY was a blast! Sophomore Ambassadors assisting, amazing new teachers and staff, and second year founding freshmen who rival the first in their enthusiasm, energy, and adherence to the UA Gateway Way convinced us that UA Gateway is on track for an another amazing year and a strong community.
Posted by Unknown at 11:43 AM